Last summer I bought a DJI Mavic drone. I was curious, but mostly I wanted to try something new. I’ve been a travel and landscape photographer for a long now and if you’re not innovating and moving forward, you’re flat-lining which is the death of an artist. This goes for any creative art form.

One of the first things you notice as a drone photographer is not the amazing aerial views, but just how little time you have in the air. As a landscape shooter I could spend hours lollygagging in one spot without a care in the world. As a drone pilot you’ve got 20-25 minutes tops before your low-battery warning alarm starts blaring at you. And once that happens you’re in survival mode trying not to crash your machine.

So what I’ve found is you need to have a game-plan going in. A general idea of what you’re going to shoot. I’ll scout using Google Maps, and that usually gives me a fairly good idea of what I can expect. Once you’re in the air, you can ‘scout’ for that killer composition but you more or less have an idea of your composition ahead of time. With experience you can per-visualize what to expect on site.

When it comes to composition it’s a brave new world. Don’t forget you’re now dealing in a 3-dimensional space. When you’re at ground level you can move left, right, forward and back. And yes, you have some latitude to move up and down but generally you’re stuck at the same altitude. With a drone, if you need some height for a different perspective, blasting up another 100 feet is easy enough. And you don’t need a lot of height. Cruising at 100 feet above ground is all you need for that aerial perspective.

I will mention this might be the only time as a photographer I’ve ever read a manual cover to cover. For drone flights it’s really important to understand what can go wrong and how to react to it, especially when sh*t hits the fan, you need to stay cool and collected. That comes only from experience and knowledge. As a beginner you only have knowledge on your side until experience kicks in. You only have to look at a few YouTube videos with all those knuckleheads flying their drones into oblivion. Stay safe and fly safe.

Another important note is you must know and understand your drone regulation. It’s an evolving document but super important to know the rules and follow them.

This is a fairly typical formation in Ontario. You’ve got a spruce bog and a meandering little stream carved into the landscape. Even before I launched my drone I knew more or less what to expect. The challenge for me was strictly composition. Here I used the orange hues of the fall season to set the tone for the shot, and the spruce trees surrounding it to give it some visual interest. The diagonal line of the stream cuts the frame in half and gives the image movement and momentum. A simple capture which brings a new perspective to your arsenal. 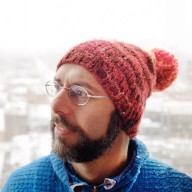 An award winning photographer and photo educator. Primarily interested in landscapes, he travels the world seeking out beauty in those wild and remote places on earth that still remain untouched by civilization and where nature commands ultimate attention. His never-ending search for off-beat adventures have led him to explore Nepal, Tibet and Patagonia. He teaches photography workshops at outdoorphotojourney.com

A passing thunderstorm in the distance illuminates

I find viewing images on Instagram doesn’t do th

milky way season is back!